The MotoLizard and what it means.
It has been said that people who talk to therapists, priests, or bar tenders all have the same mental health as people who ride motorbikes. My theory is that this all has to do with the Lizard Brain.
If you look at the evolution of the human brain you will notice the small part at the base is the Amygdala (the lizard brain as lizards and humans inherited it from a fish).  On top of the Amygdala is the Limbic system and then Neocortex (Chimp brains). The idea is that when riding a motorbike, you are allowed to regress out of your chimp brain and go full on lizard brain.
The Lizard Brain (Amygdala) assists in breathing, balance, coordination, and simple urges such as feeding, mating, and defense; or as I think of it just a normal bike ride.

Technically in charge of the website
Riding since age 16
Current Motorcycles: 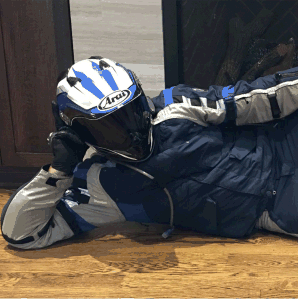