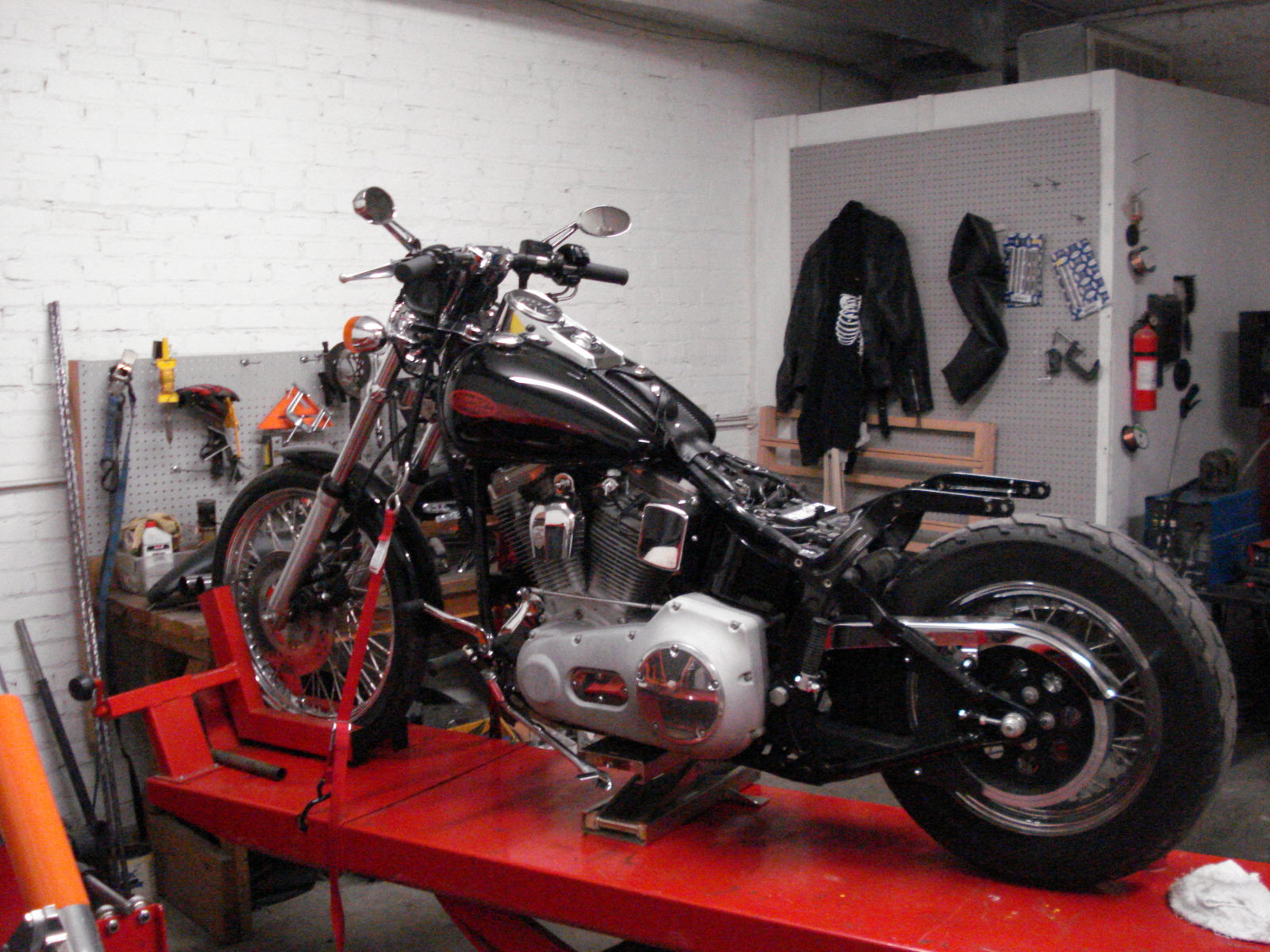 the tale of the black bike

Have you ever made a bike so much better looking but with each modification it sacrificed rideability? Its not as bad as “body dysmorphic disorder” (plastic surgery addiction) when you’re not satisfied, and you think I could change that, and it would look so much better. However it begs the question when is enough, enough? Spoiler alert is that I don’t have the answer, but I think I do have a few things for you to think about and consider. In the end its your money your decisions and the way you want to express yourself.

In October of 1998 I got me first adult motorcycle a 1999 Harley Davidson Softail Standard and the last of the 80 EVO engines. I had always wanted a Harley Softail and the Standard seemed to be a blank slate that I could build upon.

These bikes were not super performers but the engine had been around long enough that there were well known yet simple ways to make power of the engine without huge expenses.
• Supper E Carb
• Andrews EV38 CAM
• Andrews Pushrods (because bolt cutters were used to remove the HD pushrods)
• Any set of pipes (thuner headers were the best but I did screaming eagle
Bang instant better performance and the engine ran cooler

Then I started to work on the looks
• Drag bars
• Forward controls
• Bad lander seat
It looked a lot better but started to hurt if you road for more than an hour.

• Exposed belt dry primary (Tauer Renegade 3” Primary belt drive)
• Rear Wide Tire Kit (V-Twin 51-0654)
• Wide Tire swing arm kit -new belt
• Wider shorty rear fender (Fender Vtwin 50-0240)
• Wide tire and 60 spoke wheels
• Straight pipes (with 1 bolt for back pressure)
• Custom blue ghost flames on black paint
• New 21” font wheel, and new controls
• Upgraded rear brake (4 piston)
Now the bike looked and sounded good, but it would eat your pants and toss your ass off in an unforgiving manner if you didn’t pay proper attention. Which would be cool if I was not at the point in my life where I started having kids and thought the “widow maker” bike would no longer be appropriate. When the bike had all those customizations, I never wrecked it but the guy who owned it after me did.

This is not solely a Harley/Chopper phenomena as Long distance riders are also susceptible to having more farkles on a bike then they could possibly know what to do with. How many people need multiple GPS navigation systems on their bikes or lights… lights everywhere. PSA you know what the most common ride stoppage is after tire punctures and running out of gas? That’s right its badly wired light systems and cheap electrical connections. I try not to ride at night because the critters still go out in front of you regardless of how well they are illuminated. The squishable ones don’t bother me as bad as the non-squishable animals – those guys are a real pain in the ass.

Knowing when to stop

Winter can be a culprit in all this when you cannot ride so you’re doing ride planning and shopping. An Example of this is the other day I found myself looking at devices that deflate your tires a preset amount. How handy would that be – if you’re going off road you could just take 5 pounds out. Then I caught myself and thought well that’s just nuts you don’t want to spend that money and you would never find then and worse than that you would forget about them.  Having not needed them up to this point I figured I could continue to live without them. Your common sense should start tingling if your about to buy something that’s a convenience for something that’s not actually an inconvenience.
Knowing what not to pack is simple – if you have not used it on the last 3 trips then stop packing it – but the stuff bolted to the bike is harder to determine. Engine guards are cheap insurance as is a good GPS and a tall windshield, but all the other stuff do you really need it or do you just want it and like to fiddle with stuff.
Personally, I have stopped adding stuff to my 2014 BME GS except for the “been there – done that” stickers. I have exchanged out tire patch equipment for better stuff but nothing net new has been added. But I also have multiple bikes and just keeping the URAL running properly as taken care of any “fiddle with something mechanical” need I may every have.