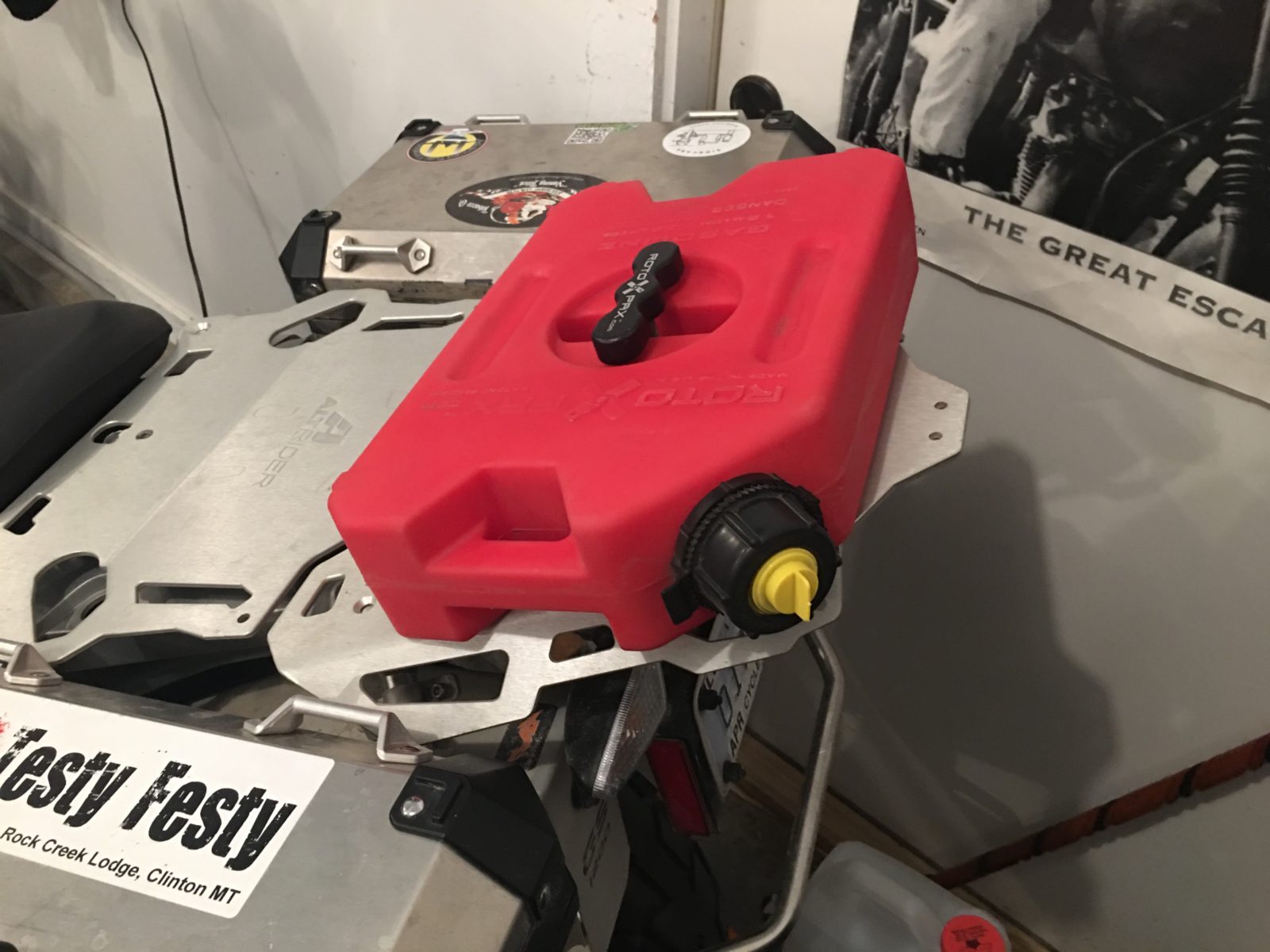 Its probably dangerous, its a lot of weight and the funny thing is I have never actually needed extra fuel when crossing the United States or Canada. Even when I had the Buell with its silly 4.4 gal tank that almost caused me to run out of gas between Little Rock and Kansas City because the GPS indicated gas stations that were nonexistent.  If you plan on 120-150 miles between stops you should be fine just make sure the GPS indicates multiple gas stations so that one might still be valid.

However if you plan on rambling around and off roading then gas could be an issue and having a gallon or so extra could help you out of some trouble.  However I guess the real reason I haul extra fuel with me on new trips is it allows me to enjoy the trip more without worrying about gas stops as much.

My first solo 4,000+ mile trip I took two 1 gallon Giant Loop Gas Bags and kept them stored 80% of the trip but when it came time to cross Wyoming, Montana and go into Yellow Stone I had no idea where I might end up and if there would be gas.  I ended up not needing them at all but was glad I had them at the time..

The Gas Bag are easy to store when not filled with gas but they require a funnel to be able to actually get any of the gas into the tank.  I used the paper “Fast Funnel” and it worked very well.  However the Gas Bags EXPAND like crazy because they dont vent and are not technically legal as they are not DOT approved.  Because they expand when filled with gas so your straps need to be very good and its not ideal and probably should not be used.

The Ural Gear Up came with a 10 liter Jerry Can and it works very well for transportation. I keep gas in this all the time because I am not all that convinced that the fuel light works on the URAL and there is no fuel gauge. However the Jerry Can does not work as is.

If you have a Jerry Can you must go and find a Nozzle to add to it or gas will spill all over the place.  With the nozzle you can very easily put gas in almost everything.

The Rotopax is by far the best system I have used so far. I have it configured with 1 gal of gas in a DOT approved container that secures to the bike.  I also have a 1 gal (white) container that holds water. I used this during a March Moto Madness run and also my Vegas round trip and the system works very well and importantly it is legal (so less hassles)

You can extend the system to take multiple 1 gal tanks. I use if for 1 gal of GAS and 1 gal of WATER but could easily switch it out for 2 gal of GAS if needed.  I do prefer the 1 Gal of GAS with the extra 1 Gal of WATER for my cross county trips.  Its the cheapest insurance policy you will get, and I have needed WATER more times then I needed GAS.

The Rotopax mount is permanently mounted to the Alt Rider luggage plate.  When its not holding extra gas or water it works really well at holding duct tape because you never know when you might need duct tape and there it is right where you can easily find it and use it at any time.